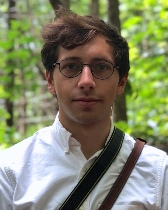 John specializes in Italy and the Spanish Atlantic in the eighteenth century. He is interested in the study of natural disasters, his research examining how city-leveling earthquakes shaped political, social, and economic change in the Kingdom of Naples and Spanish America during the era of Bourbon reform.

He received his B.A. in history and political science from Boston College in 2015 and an M.St. in European history from Lincoln College, Oxford, in 2016.