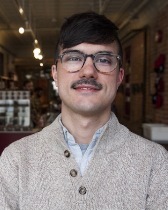 Scott De Orio was awarded the 2019 John D’Emilio LGBTQ History Dissertation Award for his work “Punishing Queer Sexuality in the Age of LGBT Rights” by the Organization of American Historians in Spring 2019.

According to an award excerpt, “The committee unanimously voted to give the 2019 John D’Emilio LGBTQ History Dissertation Award to Scott De Orio, who ambitiously traces what he terms “the long war on sex offenders” from the post World War II era to the present. Focusing on sex offender laws and policies in California, Texas, and Massachusetts, De Orio challenges the dominant narrative of LGBT movement progress, arguing instead that the second half of the twentieth century witnessed a redefining of deviance away from gays and lesbians who engaged in private sexual activity but toward sex workers, HIV-positive men, transgender people, and especially those who engaged in public or intergenerational sex.”

We are proud to have Scott in our department!