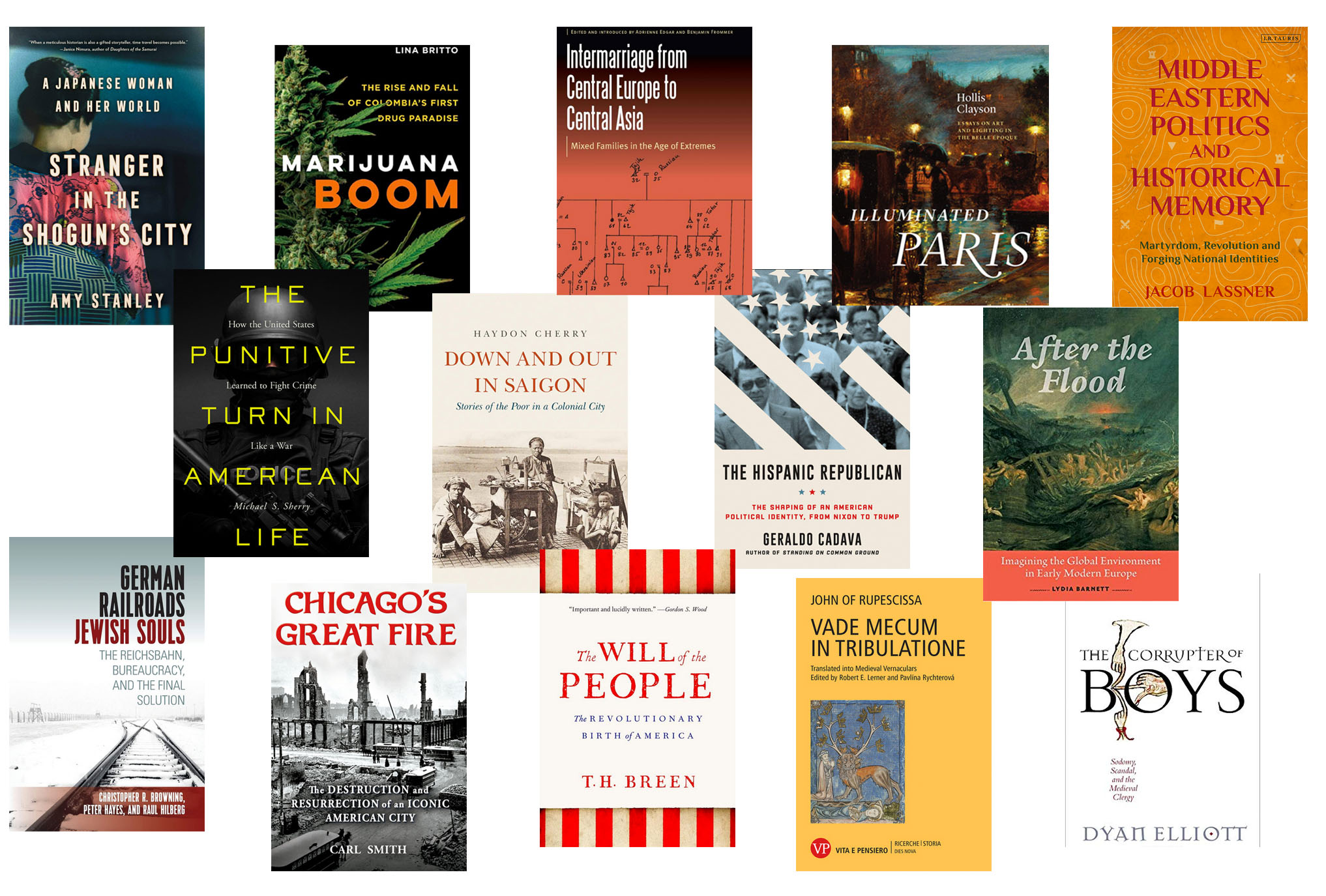 The Nicholas D. Chabraja Center for Historical Studies and the History Department organize an annual book launch reception to celebrate recently published books by History Department faculty. For several years now it has been part of the prospective graduate students’ March weekend visit to campus. Last year the Covid pandemic caused its cancelation, while this year we are planning a Zoom event on March 12. The History Department has a bumper crop of books published in 2019 and 2020 to celebrate—fourteen books in all, including six by very active emeriti. Ten authors will speak very briefly about their book and then interact with prospective graduate students in break-out rooms.

The books we are celebrating offer a wide spectrum of historical periods, geographical locations, and specific focus, from a study of sex scandals involving medieval European clergy to the life of a rebellious Japanese woman in early 19th-C. Edo. They include an examination of how the story of Noah's Flood was central to the development of a global environmental consciousness in early modern Europe, as well a study of the rise of military policing in the United States from the 1960s to the 2000s.

Anthropogenic climate change is not a contemporary discovery, as Lydia BARNETT demonstrates in After the Flood: Imagining the Global Environment in Early Modern Europe (Johns Hopkins UP, 2019) as she provocatively traces the history of this idea to the early modern period and both Protestant and Catholic accounts of the biblical flood. The book won the Morris D. Forkosch Prize by the Journal of the History of Ideas and the Kenshur Prize by the Center for Eighteenth-Century Studies, Indiana University.

Lina BRITTO’s Marijuana Boom: The Rise and Fall of Colombia’s First Drug Paradise (University of California Press, 2020), based on extensive fieldwork and oral history in the Colombian Caribbean, as well as archival research in Colombia and the United States, examines the forgotten 1970s history of Colombia’s transformation from a coffee republic to a major narcotics producer.

Much in demand as a political commentator, Geraldo CADAVA in The Hispanic Republican: The Shaping of an American Political Identity, from Nixon to Trump (Ecco, 2020) dispels the myth of a monolithic Hispanic voting bloc and gives a nuanced history of Latino voters who have embraced the Republican Party.

Haydon CHERRY’s Down and Out in Saigon: Stories of the Poor in a Colonial City (Yale UP, 2019) traces the changing social and economic history of the poor in French Indochina by following the lives of six individuals in its capital—a prostitute, a Chinese coolie, a rickshaw puller, an orphan, an invalid, and a destitute Frenchman—in the first decades of the twentieth century.

Dyan ELLIOTT in The Corrupter of Boys: Sodomy, Scandal, and the Medieval Clergy (University of Pennsylvania Press, 2020) amply demonstrates pederasty among Catholic clergy in the Middle Ages, clearly refuting arguments that this is a new phenomenon.

In Intermarriage from Central Europe to Central Asia: Mixed Families in the Age of Extremes (U of Nebraska Press, 2020) Benjamin FROMMER has co-edited, with Adrienne Edgar, an innovative volume of history and anthropology on the subject of interethnic marriage in a range of countries and eras, from imperial Germany to present-day Tajikistan.

Amy STANLEY’s Stranger in the Shogun's City: A Japanese Woman and Her World (Scribner, 2020) is a vivid recreation of the life of nineteenth-century Edo (Tokyo) through the life of an unconventional woman who migrates to the city in the hopes of bettering her life. The book was named a best book of the year by the Economist, New Statesman and Times of London as well as the Washington Post, besides being shortlisted for the Baillie-Gifford prize (the  UK's most prestigious prize for non-fiction—Stanley was the only American on the list). It was also nominated for the 2020 National Book Critics Circle Award and a Finalist for the 2021 PEN/Jacqueline Bograd Weld Award for Biography.

T.H. BREEN in The Will of the People: The Revolutionary Birth of America (Belknap/Harvard UP, 2019) focuses on the underappreciated role of ordinary colonists in sustaining the American Revolution, thereby telling a new story of this seminal event in American history.

In her richly illustrated book Illuminated Paris: Essays on Art and Lighting in the Belle Époque (U of Chicago Press, 2019) Hollis CLAYSON traces the dramatic evolution of gas and electric lighting in Paris and how artists responded to the shifting visual and cultural scenes that resulted from these technologies.

Centered on two important articles by Raul Hilberg, the founding father of  academic study of the Holocaust in the United States, the book German Railroads, Jewish Souls: The Reichsbahn, Bureaucracy, and the Final Solution (Berghahn Books, 2019) by leading historians of Nazi Germany—Peter HAYES, Christopher Browning and Raul Hilberg—examines the pivotal role of the railways in carrying out the destruction of Europeans Jews.

Jacob LASSNER in Middle Eastern Politics and Historical Memory: Martyrdom, Revolution, National Identities (I.B. Tauris/ Bloomsbury, 2020) examines the resonance of ancient and medieval history in the political disputes that dominate the Middle East in the present.

Robert E. LERNER’s  John of Rupescissa: Vade mecum in tribulatione. Translated into Medieval Vernaculars (Vita e Pensiero, 2019), co-authored with Pavlina Rychterova, presents the fruit of a large-scale scholarly investigation into a series of late medieval translations of one and the same Latin treatise, which goes under the name of the French philosopher and theologian John of Rupescissa (Jean de Roquetaillade,1310–1366).

Michael S. SHERRY in The Punitive Turn in American Life: How The United States Learned to Fight Crime Like a War (University of North Carolina Press, 2020) documents the far-reaching process, beginning in the 1960s, that moved punishment and surveillance to the center of American life, imbuing them with militarized language and practices, under the guise of  “the war on crime.”

In  Chicago's Great Fire: The Destruction and Resurrection of an Iconic American City (Atlantic Monthly Press, 2020) Carl SMITH offers readers the first carefully researched popular history of the Great Chicago Fire, one  of the most cataclysmic disasters in US history, as well as chronicling the city’s astonishing rise and rapid expansion after the fire.