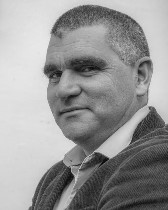 The Cuban historian Julio César Guanche Zaldívar was in residence in the department during the Spring Quarter as the Roberta Buffett Visiting Professor of International Studies. Guanche, as he prefers to be known, was successfully nominated for the position by the Program of Latin American and Caribbean Studies—at Lina Britto’s suggestion—and proved a particularly happy choice for colleagues, students and the sizeable audience who attended his keynote lecture. This was in part due to his notable qualities as a scholar; in part due to the current relevance of his specialization, namely the legal and political history of modern Cuba; and in part because he is such a likeable person.

Guanche came to the department with experience teaching in Havana, Spain and Ecuador and on the heels of a visiting position at Harvard. His specialty is the political and legal history of revolutionary Cuba—he is in fact a University of Havana-trained lawyer who saw the light—with publications including La verdad no se ensaya. Cuba: el socialismo y la democracia, (2012); Estado, participación y representación políticas en Cuba. Diseño institucional y práctica política tras la reforma constitucional de 1992 (2013); and La libertad como destino. Valores, proyectos y tradición en el siglo XX cubano (2013); he has also written for Harvard’s Cuban Studies (2016) and produced a report on citizenship in Cuba for the European Union Democracy Observatory on Citizenship. Few people know more about the history of constitutionalism in Cuba, which made his visit particularly timely in the light of the country’s 2018 constitution, eagerly awaited as the first significant political shift of the post-Castro era.

While in residence Guanche furthered his research while teaching two courses: the graduate seminar Law, Liberty, and Revolution in the Caribbean and the 300-level Independence, Social Change and Revolution in Cuba. His popularity with his students was clear. They especially appreciated the genuine concern he showed for their education and well-being. Guanche also delivered the Roberta Buffett Lecture in International Studies, the Center’s keynote event for the year, on the context, contents and auguries of the new constitution. Afterward, he sat down with Alejandro de la Fuente, Robert Woods Bliss Professor of Latin American History at Harvard, and our own Paul Gillingham for a stimulating public conversation that ranged widely and candidly across contemporary Cuban politics.