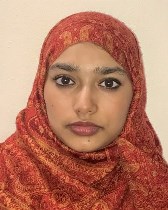 Aisha Valiulla’s field of interest lies in the cross-cultural interactions and exchanges through the land and maritime trade networks that connected the Near East to Sindh and the South Asian peninsula circa 800-1200 CE. Her concentration is in the Indian ocean world and the cultural interchanges of ideas, architecture, art, and literature. Her current research focuses on Abu'l Hasan Ali Al-Mas'udi, a 10th century Arab historian whose universal history, the Muruj ad-Dhahab wa'l Ma'adin al-Jawhar, incorporates both a social and political critique of his contemporary world and an ethnographic study of his observations during his trip to western India.