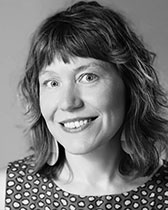 Susan J. Pearson (Ph.D., University of North Carolina, 2004) is an historian of the nineteenth- and early twentieth-century United States. She is particularly interested in the cultural politics of reform, the expansion of the state and forms of governance, and the development of American liberalism.

Professor Pearson is the author of the prize-winning book, The Rights of the Defenseless: Protecting Animals and Children in Gilded Age America (University of Chicago Press, 2011) and essays and articles in The Journal of American History, History and Theory, The Journal of Social History, and the Journal of the Civil War Era.

Pearson’s new book, The Birth Certificate: An American History, examines both how birth registration became compulsory in the United States and how birth certificates became trusted forms of identification. She shows how states and the federal government used birth registration to collect, collate, and disseminate knowledge about their populations, and she shows how birth certificates became central to the administration of social policy and citizenship. Far from acting as neutral recorders of facts, birth certificates opened and closed the gates to school, work, entitlements, pensions, passports, drivers’ licenses, even land. They were instruments in a state that sorted and allocated goods according to age, gender, race, and citizenship status.