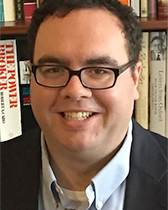 Haydon Cherry (Ph.D., Yale University, 2011) is a historian of modern Southeast Asia, particularly modern Vietnam. His first book, Down and Out in Saigon: Stories of the Poor in a Colonial City, 1900-1940, has been  published by Yale University Press. The book traces the changing social and economic history of the poor in colonial Saigon (now Hồ Chí Minh City) by following the lives of six individuals (a prostitute, a Chinese coolie, a rickshaw puller, an orphan, an invalid, and a destitute Frenchman) in the first decades of the twentieth century. His second book project is an intellectual history of twentieth-century Vietnam told through the biography of Đào Duy Anh, arguably the most important Vietnamese scholar of the modern period.

At Northwestern University, Cherry teaches courses on the history of modern and contemporary Southeast Asia as well as modern global history.