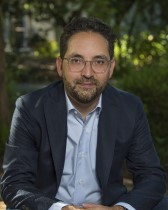 He is the author of two books. Most recently, he wrote The Hispanic Republican: The Shaping of An American Political Identity, from Nixon to Trump, published by Ecco/HarperCollins in 2020. His first book was Standing on Common Ground: The Making of a Sunbelt Borderland, published by Harvard University Press in 2013.

Other writing has appeared in The Journal of American History, The New Yorker, The New York Times, The Atlantic, the Los Angeles Times, The Washington Post, The Boston Globe, and elsewhere. You can learn more about his public-facing writing and media appearances on his website: www.geraldocadava.com.

Cadava teaches graduate and undergraduate courses on Latino History, the American West, the U.S.-Mexico borderlands, migration to and from Latin America, and other topics in U.S. History, including Watergate, the musical Hamilton, and the 2016 and 2020 elections. He is also the Director of the Latina and Latino Studies Program.