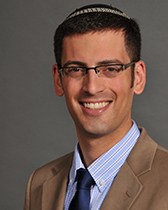 David Shyovitz (Ph.D., University of Pennsylvania, 2011) is an Associate Professor in Northwestern's History Dept., and Director of the Crown Family Center for Jewish and Israel Studies. His research focuses on medieval European intellectual and cultural history, with a particular emphasis on Jewish history and Jewish-Christian relations. He is the author of A Remembrance of His Wonders: Nature and the Supernatural in Medieval Ashkenaz, published by the University of Pennsylvania Press in 2017. His current book project, "O Beastly Jew!" Jews, Animals, and Jewish Animals in the Middle Ages, explores the overlapping ways in which Jewish and Christian authors and artists distinguished humans from animals, and Jews from Christians, over the course of the Middle Ages.