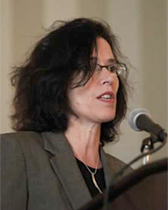 Martha Biondi (Ph.D., Columbia University, 1997) is a member of the Department of African American Studies with a courtesy joint appointment in the History Department. She specializes in twentieth century African American History and is the author of To Stand and Fight: the Struggle for Civil Rights in Postwar New York City published by Harvard University Press, which awarded it the Thomas J. Wilson Prize as best first book of the year. In 2012, the University of California Press published her book, The Black Revolution on Campus, an account of the nationwide Black student movement of the late 1960s and early Black Studies movement of the 1970s. She is currently researching a book on neoliberalism, violence and Black life, focusing on Chicago since the 1980s.

Most Recent Book: The Black Revolution on Campus (University of California Press, 2012)

The Black Revolution on Campus describes an extraordinary but forgotten chapter of the black freedom struggle. In the late 1960s and early 1970s, Black students organized hundreds of protests that sparked a period of crackdown, negotiation, and reform that profoundly transformed college life. At stake was the very mission of higher education. Black students demanded that public universities serve their communities; that private universities rethink the mission of elite education; and that black colleges embrace self-determination and resist the threat of integration. Most crucially, black students demanded a role in the definition of scholarly knowledge. Vividly demonstrating the critical linkage between the student movement and changes in university culture, the book illustrates how victories in establishing Black Studies ultimately produced important intellectual innovations and had a lasting impact on academic research and university curricula over the past 40 years.