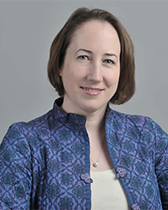 Joanna Grisinger (J.D. University of Chicago Law School 1998; Ph.D., History, University of Chicago, 2005) is Associate Professor of Instruction at the Center for Legal Studies at Northwestern University, where she teaches a variety of undergraduate courses including Legal and Constitutional History of the United States, Constitutional Law, Gender and the Law, Law and Society, and Law & the Civil Rights Movement. She received her J.D. and Ph.D. in History from the University of Chicago; her research focuses on the modern administrative state in twentieth-century U.S. legal and political history. Her first book, The Unwieldy American State: Administrative Politics Since the New Deal (Cambridge University Press, 2012), offers a political history of administrative law reform. Her current research explores public interest participation in administrative decision making; she is currently working on a book manuscript that examines airline regulation as a site for mobilization around issues of race and apartheid, disability, consumer rights, and the environment.

Prof. Grisinger is a co-founder and co-organizer (with Kimberly Welch, Kathryn Schumaker, and Logan Sawyer) of the Law & History Collaborative Research Network (established 2013) within the Law and Society Association, co-edits (with Deborah Dinner) the Legal History section of Jotwell.com, and is the advisory editor on Law and Criminology for the American National Biography Online. She is a member of the American Society for Legal History’s board of directors and is chair of the ASLH Standing Committee on the Annual Meeting.