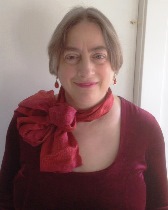 Barbara Newman (Ph.D. Yale, 1981) has published extensively on medieval religious culture, especially works by, for, and about religious women. Among her books are God and the Goddesses: Vision, Poetry, and Belief in the Middle Ages, which won the Charles Homer Haskins Medal of the Medieval Academy of America, and Medieval Crossover: Reading the Secular against the Sacred, winner of an Outstanding Academic Title citation from Choice. Prof. Newman has also translated numerous medieval Latin texts, including Hildegard of Bingen’s Symphonia, the collected saints’ Lives by Thomas of Cantimpré, the Life of Juliana of Cornillon, Mechthild of Hackeborn’s Book of Special Grace, the Letters of Two Lovers (probably by Abelard and Heloise), and the works of Richard Methley (in progress).