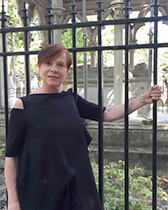 Dyan Elliott (Ph.D., University of Toronto, 1989) is a medieval historian who has published widely on medieval gender and religious history. At present, she is working on a book length analysis of the medieval clergy and sexual scandal. She has also recently completed a historical novel entitled A Hole in the Heavens (forthcoming with Bagwyn press – a subsidiary of Arizona State University’s Center for Medieval and Renaissance Studies).

I accept students who are engaged with many aspects of the cultural history of the high and later Middle Ages. My most recent graduates are Anne Koenig (PhD, 2013; presently Assistant Professor of History at the University of South Florida) and Melissa Vise (PhD, 2015; presently Visiting Assistant Professor in Italian Studies at New York University). Anne’s dissertation was entitled “Out of Their Minds: Madness, Medicine and Society in late Medieval Germany”;  Melissa’s dissertation was entitled "The Threat of the Tongue: Illicit Speech in Late Medieval Italy (1250-1450)."