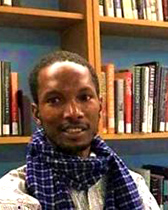 Chernoh Alpha M. Bah is a Ph.D candidate in the Department of History and Mellon Cluster Fellow in the Program of African Studies (PAS) at Northwestern. Bah’s research focuses on the history of medicine and medical experimentation in colonial West Africa. His dissertation explores how prison labor became central to different kinds of medical and agricultural projects in Sierra Leone between the First and Second World Wars; and the ways medical researchers from Liverpool and colonial officials in Sierra Leone conceptualized and justified the use of convict labor.

Before coming to Northwestern, Bah worked extensively in West Africa as a journalist, political activist, and writer. He is the author of The Ebola Outbreak in West Africa: Corporate Gangsters, Multinationals, and Rogue Politicians (2015), and Neocolonialism in West Africa: A Collection of Articles and Essays (2014), and is currently the editor-in-chief of the Africanist Press, a media agency and investigative journalism project focusing on democracy and free speech in Africa. His investigative journalism has been featured on the BBC, Radio France International, AFP, DW, among others.