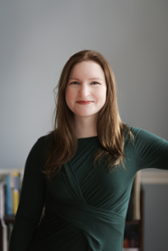 Holly Dayton is a doctoral candidate studying the history of the nineteenth and twentieth-century British World. Her research delves into the intersection of commerce and popular entertainment, exploring the export of cultural goods such as domestic literature, tabloids, and television from Britain to the Dominions from the mid-nineteenth century to the postcolonial period. She is particularly interested in the role of entrepreneurs in shaping cultural formation and affiliation, and how their role changes over time. She has a B.A. in History from Stanford University and an MPhil in Modern British History from Trinity Hall, Cambridge.